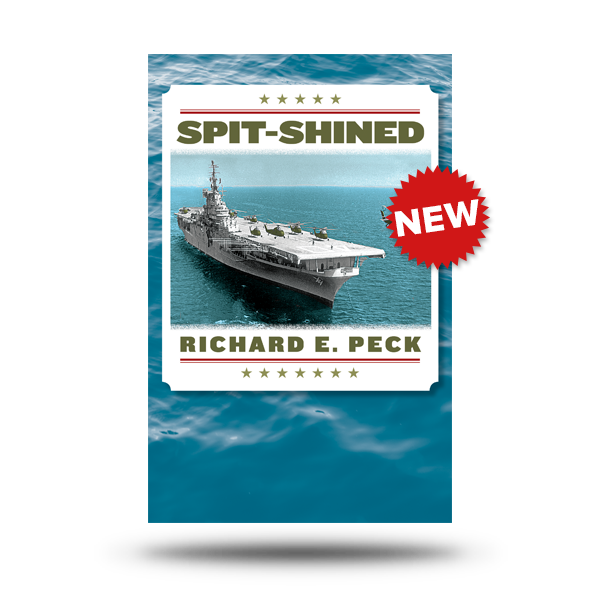 USMC helicopter pilot 1/Lt Jonas joins a two-month peacetime maneuver in the South Pacific, training to ready his squadron for combat. For “mustang” Jonas, it’s the opportunity to secure his career as a “lifer.” Two months of carrier duty (in 1959) and Jonas’s first tour abroad—Hawaii, Japan, the Philippines—may get him there. Two months to earn the future promised by his grandfather, Gunnery Sgt Michael Jonas, USMC Ret. The future doesn’t always go as planned.

Interesting and humorous insights into the “old” corps. Worth reading by both former Marines and anyone curious about the life lessons learned by the young me who had the privilege to serve in the United States Marine Corps. – Lance Corporal Dale Ek, USMC 1957-60

Multitalented novelist, playwright, and jack of all genres Richard E. Peck has written a winning memoir combining his military service with his trademark wit and insight to produce Spit-Shined … a treasure of pathos, humor, satire and truth in the peacetime military, where petty tyrants jostle for promotion and make life Hell for those under their command. Yossarian and Ensign Pulver would feel right at home. – Col. Rob Kresge, USA 1968-98

Spit-Shined, another jewel from the talented Richard E. Peck, spans 49 days with Marine Corps helicopter pilots in a 1959 training exercise held in the South Pacific. Brash young USMC 1st/Lt Jonas comes of age during the story and has us rooting for him from the first page. A must read for all veterans. – Patricia Smith Wood, author of The Easter Egg Murder

There are no reviews yet.

Be the first to review “Spit-Shined” Click here to cancel reply.